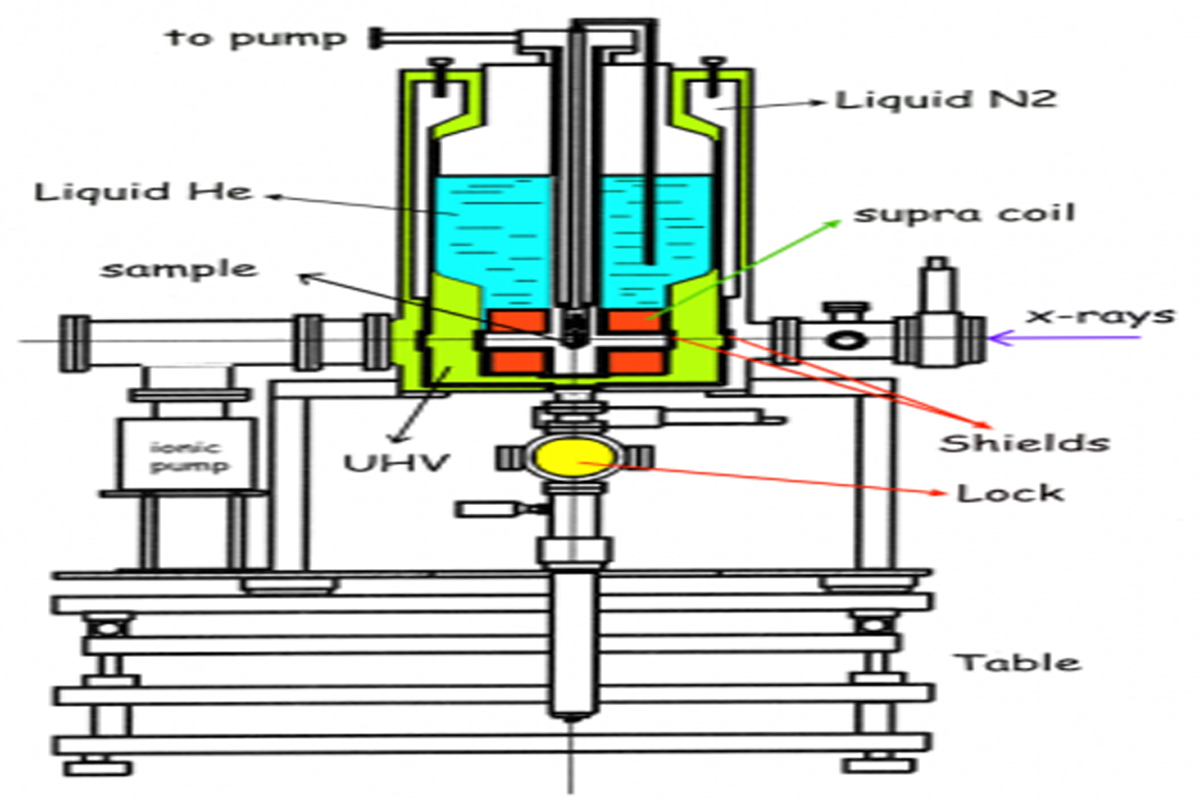 There can be three issues to photon-matter interaction : nothing happens, the photon is absorbed, a stimulated photon is emitted. An incident photon can induce an electronic transition between a state of energy E1 to a state E2 if some conditions are fullfilled, in particular with the energy : the energy hν of the photon must satisfy the relationship hν ≈ E2-E1. This condition on the conservation of energy is not enough for the process to occur with a significant probability. The quantum numbers (n, l, m, s) associated to the initial and final electronic states also must obey “selection rules”. The most well known and critical one being the one ensuring that the angular momentum is constant, it writes : ΔJ = 0, ±1. If the system is in a magnetic field, the electronic states possibly are not degenerate any more. The absorption of circularly polarised photons can then occur if an additional selection rule is obeyed : Δm = ±1. The fact that the absorption becomes dependent on the polarisation state of the incident photons is called circular magnetic dichroism. For transition and rare earth metals, the elements most involved in magnetic systems, the photons have energies in the x-ray range, between 350eV and a few keV, hence the “X” in XMCD.

The selection rules for a mono-photonic transition under a magnetic field therefore write :

with Δm = +1 for a right-handed circularly polarised light, Δm = −1 for a left-handed light. One may finally observe that the interactions (absorption and emission of a photon) for which Δl = +1 are much more probable, by one order of magnitude [1].

If we consider an atom that would have 6 electrons in the following configuration :

In the fundamental state only the |l =1, m =1> is empty. Under the action of a right-handed incident photon an electron can go from the |0, 0> state to this empty level. There is therefore a non-zero absorption cross -section. If the helicity of the photon is changed, the selection rule on m requires that the electron should move to the |l =1, m = −1> , level, which already full. The absorption cross-section will xconsequently be very small, the material is dichroic.

It is technically difficult to directly measure the absorption of the incident light, particularly in the case of low energy photons (<5keV) for which the penetration depth is very shallow. One then indirectly measure the absorption either with a fluorescence detector or through the measurement of the photocurrent resulting from the ejection of photoelectrons from the sample (TEY or total electron yield mode).

The sample is kept in ultra-high vacuum (<10-10 torr) in a cryostat which allows temperatures between 300K to 300mK to be reached.

The photons of adjustable energy are provided by an undulator (insertion device) placed on a synchrotron ring.

Beyond experimental constraints (accessible energy range, sensitivity,…) it is theoretically possible to mesure the XMCD signal of any sample which has at least a paramagnetic moment and a non-zero spin-orbit coupling. Below are given the spectra recorded on an FeNiCo alloy, it can be seen that the constitutive elements absorb at specific energies which makes it possible to measure their magnetic properties independently.

Thanks to the “sum rules” the analysis of the XMCD spectra gives access to the spin and orbit moments of the element under study. For doing so, all that is needed is : 1) the absorption signal at zero field (XAS spectrum) and its integral, which gives the “r” parameter, 2) the difference between the signals recorded for the two light helicities, the XMCD signal (in green and blue in the figures below). The complete integral of this signal gives the “q” parameter, the integral of the XMCD signal limited to the first edge gives the “p” parameter.

Sum rules for a 3d element:

It must be underlined that the sum rules are not always valid. This being said and independently from any model or calculation, the measuring of a dichroism already gives qualitative but important information : 1) a dichroic signal implies that the element bears a magnetic moment, 2) if the q parameter is zero, as in the example above, the orbit moment of the element is zero, 3) the sign of the XMCD signal and that of its integral give the orientation of the spin and orbit moments relative to each other and to the applied magnetic field.

Another example with a non-zero orbit moment :

But it is also a team work :