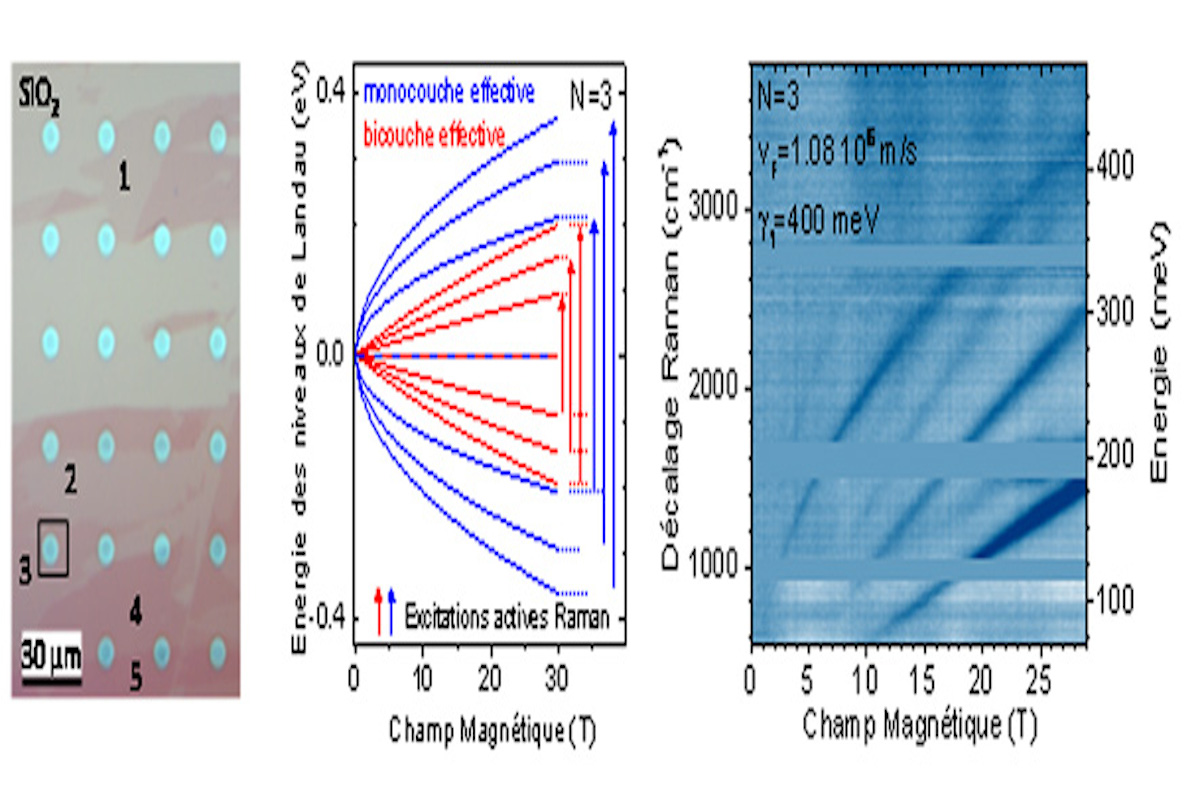 The electronic properties of bilayer graphene drastically differ from those of monolayer graphene. These two (quasi)bidimensional systems are the building blocks necessary to describe the electronic properties of the family of stacks of N-layer graphene, up to the limit of the bulk material, graphite. A detailed study of the members of this family of electronic systems could reveal new quantum transport regimes, potentially useful for future applications. Researchers from the Institut de Physique et Chimie des Matériaux de Strasbourg and from the Laboratoire des Champs Magnétiques Intenses de Grenoble have measured for the first time the evolution of the electronic band structure of stacks of N-layer graphene, from the mono- to the pentalayer, using Raman scattering spectroscopy with an applied transverse magnetic field. These studies have been published in NanoLetters.

Researchers have deposited high crystalline quality graphene flakes onto a substrate, pre-patterned with micrometer scale holes. In such conditions, it is possible to find graphene flakes suspended over holes, hence, non-affected by the substrate and from which the intrinsic properties can be probed. When a magnetic field is applied, electronic states of N-layer graphene specimens transform into discrete and highly degenerated Landau levels, with an evolution as a function of the magnetic field which directly reflects the number of graphene layers. The Raman scattering response of N-layer graphene has been measured at low temperature and with an applied magnetic field up to 29 T. In addition to the well-known vibrational Raman features, new larger features showing pronounced dispersions with the magnetic field appear. They are attributed to an electronic Raman scattering process, implying electronic transitions between Landau levels. Tracing the evolution of such excitations as a function of the magnetic field allows imaging the characteristic Landau level structure of a N-layer graphene specimen, to finally deduce the B=0 electronic band structure and, in particular, the Fermi velocity. Because of dielectric screening, the Fermi velocity is found to decrease when increasing the number of graphene layers to reach the value measured in bulk graphite. The electronic Raman scattering process observed for first time in suspended graphene, opens new avenues in the research on graphene and on 2D semiconductors, in particular in the search for effects of many body interactions in the optical response of graphene. Magneto-Raman spectroscopy appears as a well-adapted, contactless technique to probe electronic excitations at the micrometer scale. This approach could be applied to the study of other bidimensional crystals such as silicene, phosphorene and the large family of transition metal dichalcogenides.