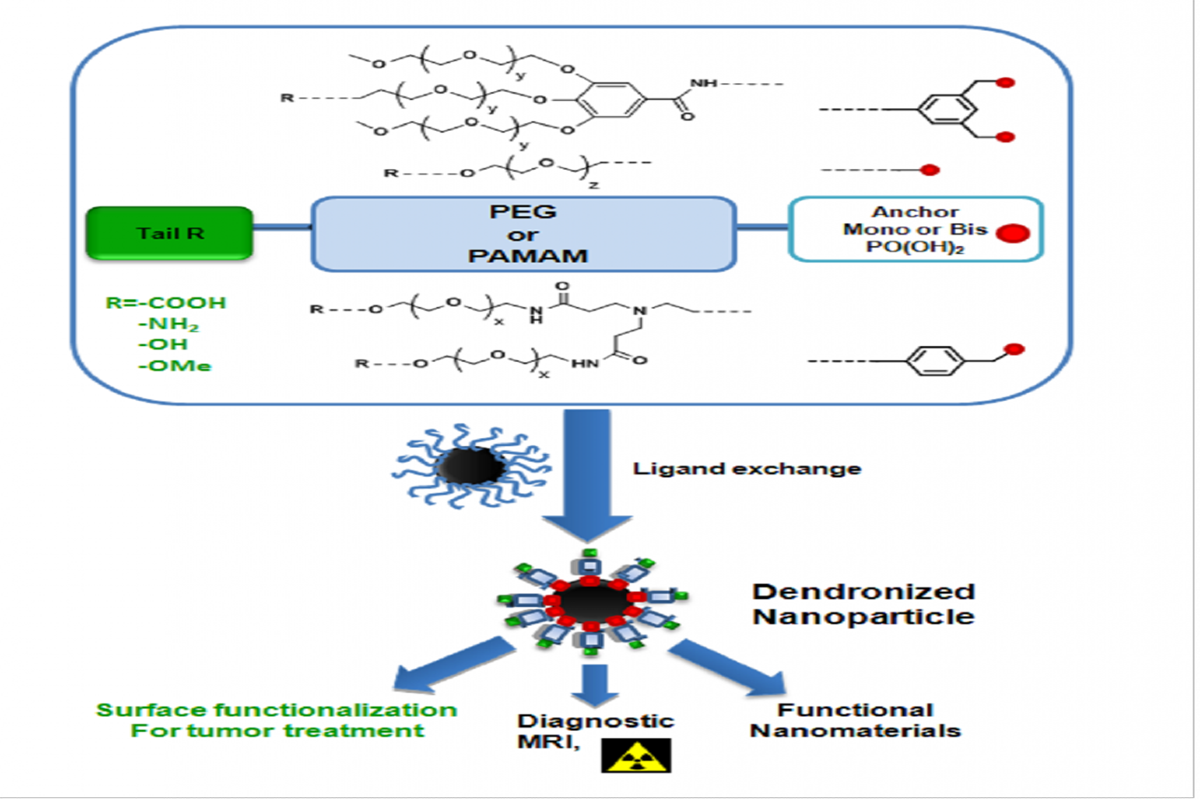 Molecular imaging consists of non-invasive mapping of molecular and cellular processes associated with disease progression in living systems. The main advantage of in vivo molecular imaging is its ability to interrogate diseased tissues without biopsies or surgical procedures, and with information in hand, a more personalized treatment regimen can be applied. Modalities that have been used for molecular imaging include Positron Emission Tomography (PET), Single Photon Emission Computed Tomography (SPECT), optical imaging and Magnetic Resonance Imaging (MRI) [1–2]. Each imaging modality has it own strengths and drawbacks and differ in spatial resolution, depth penetration and detection sensitivity.
Current progress in the nuclear medicine field has been exploited in the design of tumor targeting nanoscale carriers to improve the outcome of both cancer diagnosis and therapy. In this field dendrimers have a crucial role to play, thanks to their controlled architecture allowing multivalent attachment possibilities of radionuclide chelators and targeting moieties.
Molecular imaging of cancer must be highly sensitive because concentrations of biological molecules abnormally expressed in tumor tissues are, in general, very low (in the picomolar to nanomolar range). Therefore, the ultimate goal for cancer diagnosis and therapy is the development of an imaging probe that is sensitive enough to differentiate tumors from normal tissues in the early stages of disease. But this objective meets important obstacles such as a relative inefficacy related to the insufficient uptake of the probes by the tumor combined to the impossibility to increase doses without increasing concomitantly unacceptable toxicities related to unspecific uptake or retention. One possible approach to increase targeting efficiency is to build systems containing two different ligands showing specificity towards an identical over-expressed receptor of the target cells. Such molecular “bi-specific” objects combined to a pre-targeting system (the therapeutic agent is secondly injected) are already estimated in metabolic radiotherapy. Another approach is to combine several recognition elements of the targets. Such a principle is used for in vitro identification of specific cells by cellular sorting with fluorescent markers (FACS system). Multivalent nanoplatforms have evidenced a “polyvalency effect” corresponding to an enhanced extracellular membrane receptor binding. We go a step further trying to reach an intracellular target. Therefore, considering their cooperative effect and transfection properties, dendrimers seem to be optimal candidates as intracellular targeting probes. To confirm such hypothesis we synthesized three 111In-radiolabeled nanoprobes and compared their in vivo targeting power towards melanin, a biopigment produced within vesicles called melanosomes located inside melanocytes. Together with linear probe 1 derived from bifunctional 1,4,7,10-tetraaza-cyclododecane-1,4,7,10-tetraacetic acid (DOTA) (Figure 1), we synthesized generation 1 (2) and generation 2 (3) polyethylene glycol (PEG)-modified polyamidoamine (PAMAM) dendrons at every terminal amino group, which maintain the monodispersity of the small dendron platforms (short PEGs). Indeed, PEGylation provides stealth-like characteristics and long-term plasma stability. The PEG was further conjugated to a melanin-targeting ligand derived from quinoxaline (R’, Figure 1) through a BOP/DIPEA-mediated peptide coupling to obtain dimer 2 and tetramer 3. Final deprotection of the three carriers was performed by silanisation.
The radiolabeling of 1, 2 and 3 with 111In (radioactive period=2.7 days) allowed performing long delay biodistribution studies with a high radiochemical purity (>97%).
B16F0 melanoma bearing mice were intravenously injected (iv) under gaseous anesthesia with 1 to 10 MBq (50 to 100μL) of one of the three 111In-probes 1-3. The comparison of the tumor targeting efficiency of 1-3 was based on the ratio of injected activity (%ID) within the tumors as a function of the post-iv delay calculated from ex vivo gamma counting measurements of tumors and main organs removed and weighted after euthanasia, and compared to the similar ratio of the normal tissues. Similar measurements were performed on daily collected excretion products (urines and feces) allowing calculating the elimination rate of the probes.

The highest tumor accumulation was observed with 3 at 4h post-injection (p.i) (12.7±1.6%ID/g v.s. 5.4±1.6 %ID/g at 2h), and therefore over than 11% for any tumor weight whatsoever (Figure 2a) leading to high tumor to blood ratio. For 2, no increasing tumor uptake was evidenced between 2 to 4 h p.i (8.1±2.3 %ID/g at 2 h v.s. 8.0±4.4 %ID/g at 4h). With 1, the highest mean values uptake was 1.5±0.5%ID/g and was observed at 24h p.i. Tumor uptake was significantly (p<0.05, see ESI) higher for 3 injected animals as compared to 1 and 2 at 2 and 4h p.i. Interestingly, tumor uptake of 1-3 was not influenced by tumor size (Figure 2b) as frequently observed with nanoprobes, which often vary inversely with the tumor weight. This finding appears of particular interest if we consider the potential use of the dendritic nanoprobe as diagnostic imaging agents but has although important implications for a theranostic approach.

Figure 2 : Tumor uptake studies. a) Mean values of tumor %ID/g and their ratio over normal tissues (liver, lungs, kidneys and blood) as a function of the post iv delay for 111In-radiolabeled probe 3; b) Tumour %ID/g as a function of tumour weight at 2 h (clear symbols) and 4 h (dark symbols) post iv for 111In-radiolabeled probes 1 (circles), 2 (squares) and 3 (triangles).

Figure 3 : Elimination parameters. Top a) Tumor ID%/g mean values as a function of the elimination rate (%), inferior (internal circle) or superior (external circle) to 50%, at 2h (clear squares) or 4h (dark triangles) post iv of 111In-radiolabeled probe 3; Bottom b) Comparison of the elimination pathways of 111In-radiolabeled probes 1-3 and standard deviation of the feces and urine excretion rates at 1d (D1) post-iv, and the sum of total excretion rate at 1d (D1) and 2d (D2) post-iv.

A similar effect was observed with 2. Therefore, all experiments were then performed under hydria diet conditions applied 15 min before to 30 min after iv injection, with a strong effect on the clearance of 3 which was inferior to 72 % of ID in all animals (#8) at 2 and 4h p.i. In contrast, despite the same experimental conditions, the clearance of linear probe 1 was still high (up to 85% of ID at 2 and 4h) without enhanced tumor uptake.
Such a fast elimination of 1 could explain the highest elimination rate at 24h post-iv (90.3±3.0% of ID) versus 2 (82.7±4.9% of ID) and 3 (66.1±17.2% of ID). However, the elimination pathway of all three radiolabeled probes was predominantly renal, although a small biliary excretion was evidenced by the feces radioactivity (Figure 2b).
The complete biodistribution study of 3 (Figure 4) evidenced a moderate liver activity even at its maximum at 24h p.i (16.0±6.7%ID/g), followed by a dramatic decrease at 48h p.i (2.2±0.9%ID/g). The parallel increase of the feces activity until 48h (see ESI) indicated the Küpfer cell uptake, which could be assimilated to the liver activity at 48h p.i. and was insignificant (2.4±1.0 %ID/g for whole liver). As demonstrated also by the total activity of bones (medulla), liver, and spleen (1.5±0.9 %ID/g at 48h), the reticuloendothelial system (RES) uptake was very low. No significant lungs accumulation was observed at any time. The high accumulation in kidneys and bladder observed until 24h p.i reflected the slowing down of the dieresis induced by the hydric diet. However, 84.2±5.5%of the ID of 3 which was not uptaken within the tumor was eliminated at 48h p.i, mainly through renal excretion (89.6±0.1%ID) without accumulation in other organs and RES tissue.

Figure 4 : Quantitative biodistribution pathways of 111In-radiolabeled probe3 as a function of the post iv delay (2h, 4h, 24h, 48h), expressed in %ID per gram of tissue, in the normal tissues and in the tumor.

It is clear that an optimal radiotracer should be able to have a high tumor uptake with a diagnostically useful target-to-background ratio in a short period of time. To achieve this goal, the radiotracer should have a fast blood clearance to minimize non-target radioactivity. The time for the radiotracer to reach the target should also be short. We showed that dendritic nanoprobe 3 fully fits into these criteria. Its high in vivo targeting efficiency towards an intracellular target makes such nanoprobe a promising candidate for clinical tumor diagnosis. The purpose of this research, namely proof-of-concept for exploiting small dendrons in melanoma diagnosis has been clearly demonstrated. In this regard, multivalent but small all-organic nanoprobes may have a bright future not only for imaging sensitivity enhancement but also for internal radionuclide therapy applications using 90Y or 177Lu thanks to the DOTA functionalization in order to deliver in vivo radiation doses to tumors.

Research on inorganic nanoparticles (NPs) is rapidly expanding with a large variety of applications as well as strategies for their synthesis. Most often their surface modification is critical, in particular to avoid their aggregation, make them dispersible in liquid media or functionalize them. Many research groups worldwide are actively developing superparamagnetic iron oxide (SPIO) NPs with the emergence of a vast number of applications in health sciences including combined in vivo magnetic resonance (MR) and optical imaging via multimodal NPs, hyperthermia or drug delivery. In parallel, biodendrimers (biocompatible and branched molecules) are being developed due to their precisely defined structure and composition and high tuneable surface chemistry. A clear input is brought by these branched molecules as they are discrete entities in which size, hydrophilicity, molecular weight and biocompatibility can easily be tuned as a function of their generation. Furthermore, a dendritic shell allows versatile polyfunctionalization at its periphery which could lead to multimodal imaging probes through dye grafting and theranostics through specific drug anchoring. Optimized biokinetics of a diagnostic and/or therapeutic probe show both low unspecific uptake and complete elimination of the untargeted probe within a few days. This is a prerequisite for human and clinical use. Therefore, designing versatile nanohybrids that display both high selective tumour uptake and low unspecific uptake is a major challenge (Figure 5).

Figure 5 : In one of our recent studies we reported the functionalization of spherical SPIO NPs with PEGylated poly(amido)amine (PAMAM) dendrons through a bisphosphonate tweezers that yielded 15 and 30 nm dendritic nano-objects stable in physiological media. PEG chains were introduced on PAMAM dendrons to ensure water molecule capture and retention for improved contrast enhancement. The NPs were additionally functionalized with a fluorescent dye and in vitro and in vivo MR and fluorescence imaging were simultaneously evaluated. The latter clearly highlighted that the dendritic organic coating impacts the nanoobjects aggregation state, thus influencing the bioelimination speed: NPs covered with small dendrons are rapidly and completely eliminated within 24 hours post intravenous injection, predominantly by urinary elimination (Figure 6).

In one of our recent studies [3, 4, 5, 6, 7, 8] we reported the functionalization of spherical SPIO NPs with PEGylated poly(amido)amine (PAMAM) dendrons through a bisphosphonate tweezers that yielded 15 and 30 nm dendritic nano-objects stable in physiological media. PEG chains were introduced on PAMAM dendrons to ensure water molecule capture and retention for improved contrast enhancement. The NPs were additionally functionalized with a fluorescent dye and in vitro and in vivo MR and fluorescence imaging were simultaneously evaluated. The latter clearly highlighted that the dendritic organic coating impacts the nanoobjects aggregation state, thus influencing the bioelimination speed: NPs covered with small dendrons are rapidly and completely eliminated within 24 hours post intravenous injection, predominantly by urinary elimination (Figure 6).