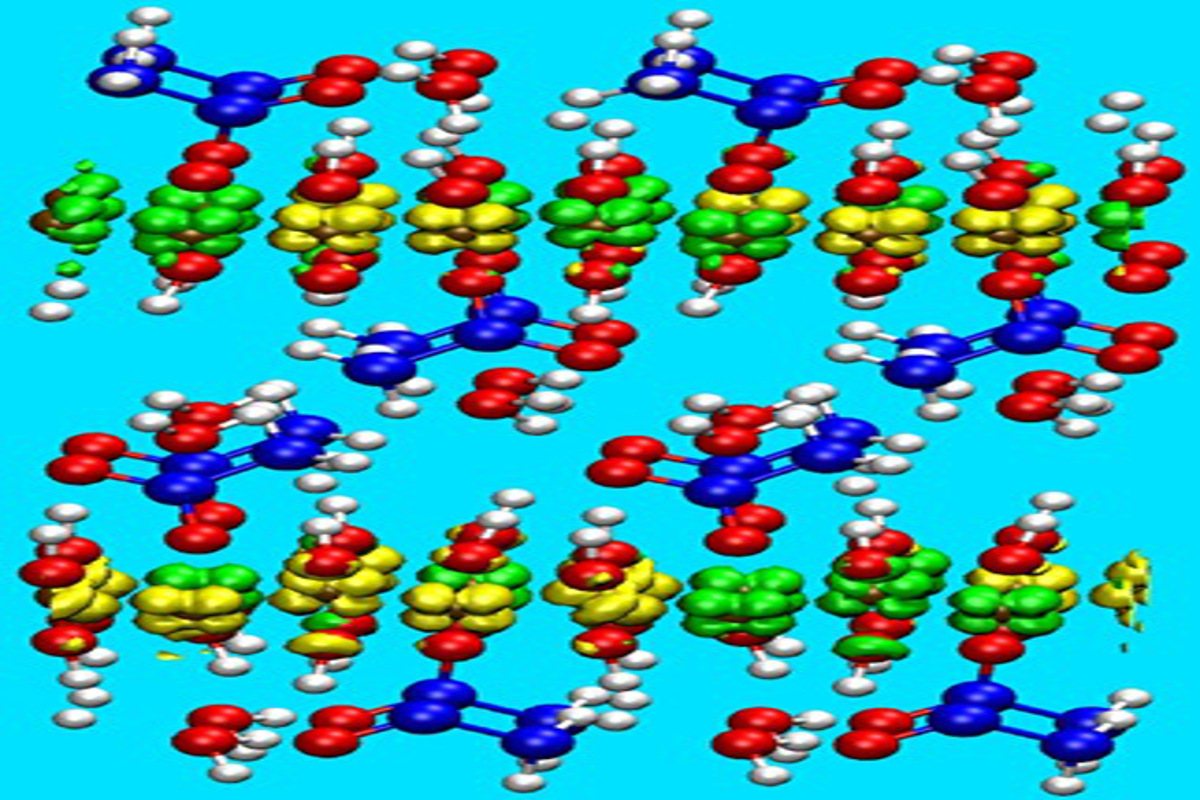 Layered organic-inorganic materials are characterized by a wealth of correlations between intralayer and interlayer structural changes and the resulting magnetic properties. Our team is very much concerned by the atomic-scale description of these correlations and by the first-principles knowledge of how the electronic bonding establishes between the different structural units. Indeed, low-dimensional and nano-scale magnetic materials are typically obtained by using a bottom-up approach in which molecules are taken as constitutive units.Hybrid organic-inorganic compounds have opened an alternative route to the implementation of controllable nanomagnets by combining at the nanometer scale molecular species and inorganic layered networks.Outstanding examples are the layered transition metal hydroxides M2(OH)3X (M: divalent metal, X: exchangeable anion). These systems exhibit tunable magnetic behaviors depending on the nature of the inserted species, the character of the in-plane and inter-plane interactions and the interlayer separations. Due to these different contributions, a precise understanding of magnetism at the atomic scale cannot rely on approximations based on the superposition of quasi isolated magnetic entities. This calls for the application of solid-state chemistry theoretical approaches to evaluate available fingerprints of the magnetic character, such as the magnetic susceptibility. Linking an elaborate pattern of exchange coupling pathways to an experimental property, with no a priori approximations on the nature of the magnetic interactions, is a longstanding challenge in theoretical magnetism that we are willing and able to meet for this class of materials.

Over the years, this topic has developed according to the following lines:

1)      We have focused on copper hydroxide nitrate (Cu2(OH)3NO3) as a prototypical case of hybrid organic-inorganic material featuring an anti-ferromagnetic character both on each place and as a whole (S=0 within each layer). The system has been described in terms of bonding features (electron localization functions), electronic density maps and a calculation of the exchange coupling constants.

2)      In the case of copper hydroxide acetate, structural optimization was found to be a necessary prerequisite in the absence of a reliable experimental structure. We were able to highlight the spin topology within each plane for different bulk situations corresponding to zero and finite spin. This system is known for being anti-ferromagnetic (at ambient conditions), each plane having a ferromagnetic character.

3)      A very recent achievement (2014, to be published) concerns the magneto-structural correlations in the presence of an external pressure. For sufficiently high values of the external load, copper hydroxide acetate undergoes a change from the anti-ferromagnetic to the ferromagnetic character.