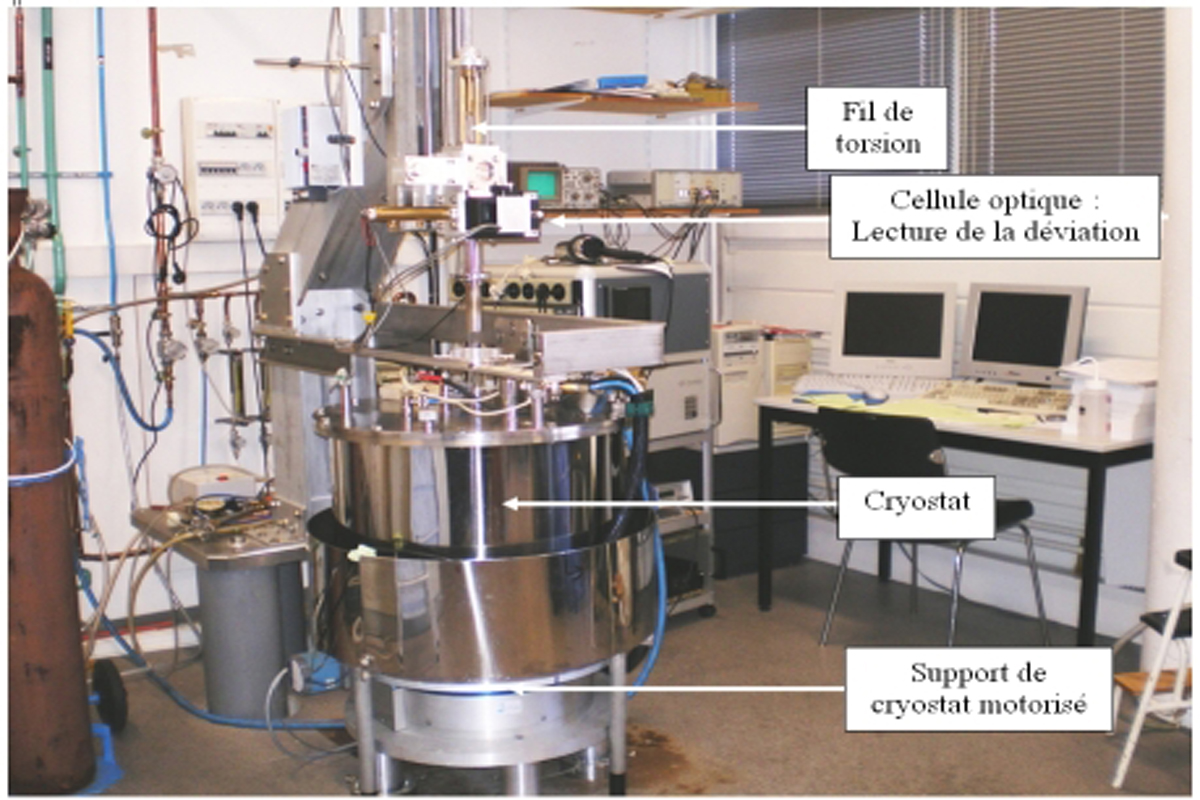 Torque magnetometry is the most straightforward technique to derive the magnetic anisotropy energy of a magnetized body and determine its directions of easy and hard magnetisation. Applied to samples with particular and complex magnetic behaviours such as magnetic multilayers and superconductors, this experimental technique allows one also to study more specific phenomena, such as relaxation processes or irreversible rotation of magnetic moments (rotational hysteresis).

The method used at IPCMS to evaluate the magnetic anisotropy energy is an uncompensated one. The sample under investigation is freely suspended from a thin metal torsion wire (or ribbon), of known stiffness constant, and placed in an horizontal rotating magnetic field. When submitted to a strong magnetic field, the magnetisation of the specimen tends to line up with the field and the specimen tends to rotate so as to make an easy direction of magnetisation approach the direction of the magnetisation. At equilibrium, the magnetic anisotropy torque to be determined is equal in amplitude and opposite in sign to the torque exerted by the torsion wire on the sample. The latter is proportional to the angle twist of the suspension, which is read off directly by means of an optical technique. The torque curves thus recorded as the external magnetic field is continuously rotated are related to the derivative of the anisotropy energy functional with respect to the magnetization angle.

The accurate determination of the anisotropy constants requires that the applied magnetic field be sufficiently large to magnetize the sample to saturation and remove all domain walls. Fields produced by an electromagnet are adequate for torque measurements on most materials. However, if the sample has an exceptionally high magnetic anisotropy, and then necessitates a large magnetic field to ensure saturation, a superconducting magnet must be used. IPCMS possesses two torque magnetometers equipped respectively with a conventional electromagnet (maximum field of 1.2 T) and a superconducting split coil (maximum field of 5T). Both of these instruments have an ultimate sensitivity of 10-3 dyne.cm (10-10 Nm) and can measure torques up to 1000 dyne.cm. The sample temperature may be varied from 6 K to 350 K using a continuous flow He cryostat with a static insert tube and up to 900K in a furnace under secondary vacuum..