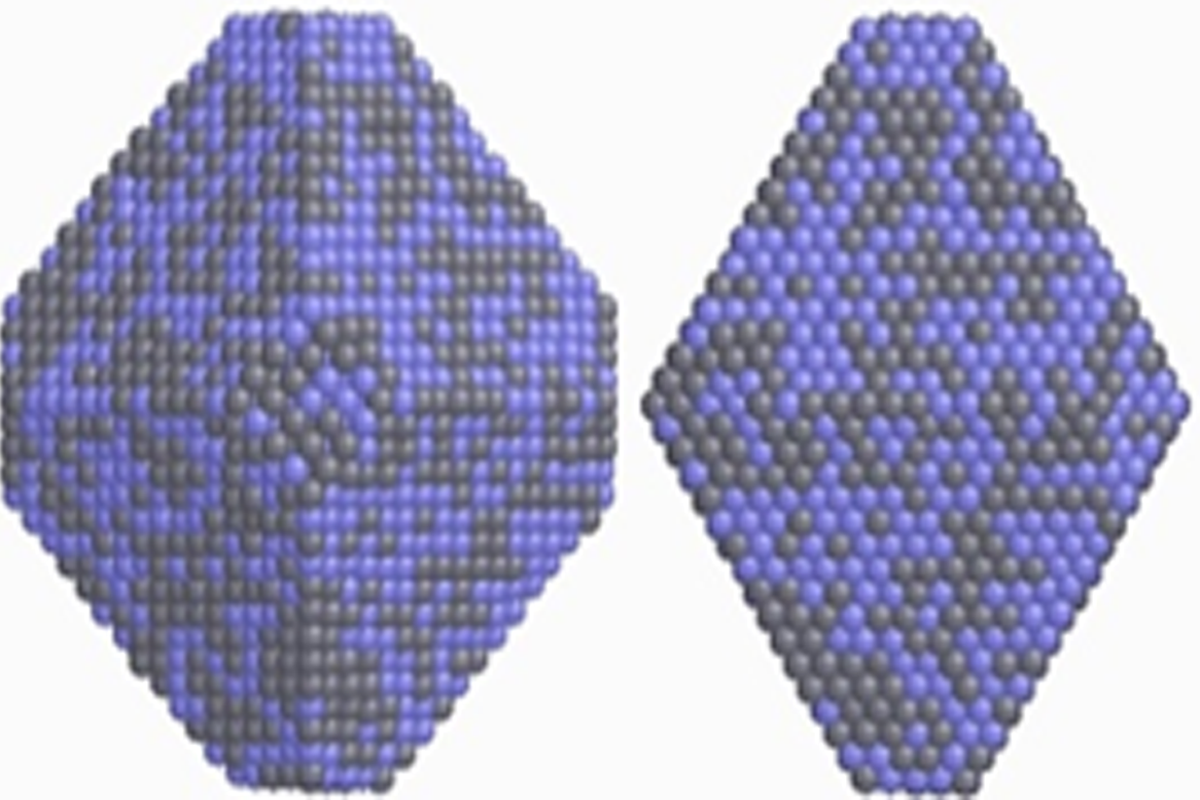 We evidenced slight variations of the truncation of these nano-octahedrons depending on their size: the largest particles are less truncated than the smallest particles. We also highlighted the up-down symmetry of the NPs, suggesting that the adhesion energy of FCC–CoPt on NaCl is negligible (Fig. 2). Energy descriptions of these NPs were made by using quenched molecular dynamic in the framework of the second moment approximation of the tight-binding formalism, while taking into account the random distribution of Co and Pt atoms (Fig. 3).

In a general manner, this original energy approach for studying faceting in chemically disordered nanoalloys is consistent with experimental results, particularly for small-size clusters. However, as the experimentally observed size-effect on the NPs truncation was not theoretically predicted, this phenomenon could originate from kinetic effects inherent to nanocrystal growth.

Figure 3: Size along the <110>-type directions (-S110) as a function of the size along the <100>-type directions (-S100). To take into account the slight anisotropy of the NPs along the [110] or [1-10] directions, error bars are defined as (S110 – S1-10) / 2 and (S100 – S010) / 2, along the abscissa and ordinate axes, respectively (highly anisotropic NPs were not measured). Black squares and red circles correspond to experimental and calculated data respectively. The truncation of the NPs is characterized by the ratio Rt = -S110 / -S100. The blue dashed line corresponds to the non-truncated octahedrons (Rt = 2-1/2), shown in 3D and in [001]-projection in the bottom inset. The red area corresponds to the truncated octahedrons with Rt = 1.08 ± 0.02, according to Wulff’s construction (shown in 3D and in [001]-projection in the top inset). The black solid line indicates the mean value of the experimental Rt ratios (0.92 ± 0.05). Right panel: minimization of total energy for nanoparticles with 4579 atoms and various truncations.