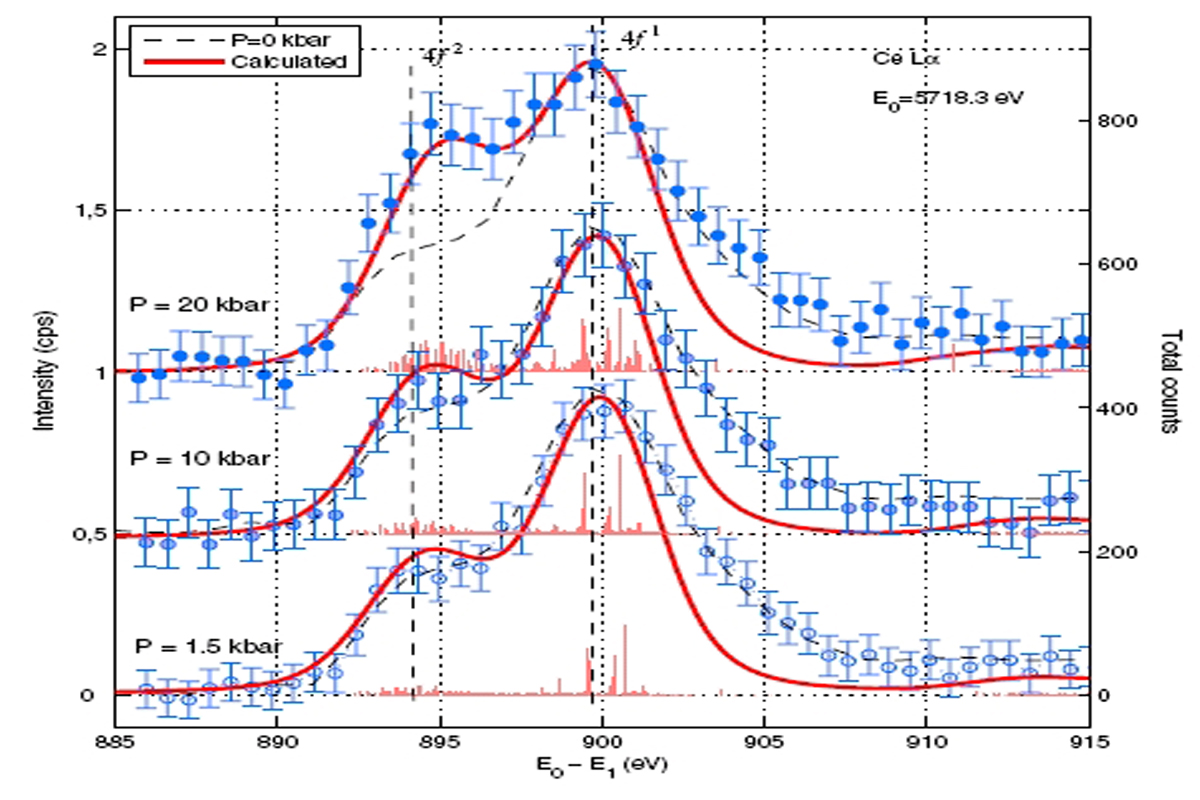 Probing the Transition in Bulk Ce under Pressure : A Direct Investigation by Resonant Inelastic X-Ray Scattering

This Transition in Ce is archetypical of localization-delocalization phenomena encountered in f-electron systems. This isostructural phase transition accompanied by a large volume contraction (14%) is a manifestation of subtle interactions between f levels self-consistently embedded in a sea of conduction electrons, this transition is commonly described by either a Mott transition or a Kondo hybridization.

Important information about this transition is contained not only in the occupation number, nf, but also in the probability of double occupancy of the f sites. It is well known that the f states are clearly identifiable in spectroscopies (absorption, XAS or photoemission, XPS). Many proofs of the mixed-valent behaviour has been accumulated unambiguously from such experiments. Well separated features, each assigned to different f states, indicate that the f configurations are mixed in the ground state. But the different screenings of the core hole by the |f 0>, |f 1> and |f 2> states, lead to strong difficulties to estimate the various f-electron weights and therefore the degree of hybridisation of the f electron at the origin of the heavy-fermion-like behaviour of Ce.

Recently, Resonance Inelastic x-ray Scattering (RIXS) has emerged as a means of probing the mixed-valent behaviour in rare earths (RE) systems in considerable details. The experiment consists in measuring the 3d->2p decay following a resonant excitation close to the RE-L2,3 edges (2p->5d transition).

The RIXS process benefits from the selective resonant enhancement of the different states. Previous series of experiments [1] have revealed a well-defined feature associated with the |f2> configuration, which is normally hidden in XAS spectra. The f 1/f 2 ratio, as a function of temperature, closely resemble the magnetization loop of the

transition induced by chemical pressure in Ce-Th alloy. However, electron interactions with the dopant element necessarily intervene in the Ce-4f electronics properties.

We have investigated elemental Ce, by 2p3d-RIXS, directly subjected to high pressure to induce the

The figure 1a shows the experimental results obtained as a function of pressure ; the white line presents a marked decrease in intensity as Ce is driven though the

transition, while the feature 4f0 progressively builds up at high energy. These spectral changes are consistent with the early results obtained by RKKW. The XAS final states split into multiple components because the 2p core-hole Coulomb potential acting on the mixed-valent ground state c0|f 0> + c1|f 1> + c2|f 2>, where |cn| 2 represent the weight of the individual components. Note that in these experiments the 4f 2 component is masked by the 2p3/2 core-hole lifetime.

In figure 2, we can follow the evolution of the 2p3d-RIXS, measured at E0=5718 eV, as the pressure is increased. A striking increase (40%) in the 4f 2/4f 1 intensity ratio is observed as the system passes the transition. By carrying out full multiplet calculations within the Anderson impurity model we obtain the simulated XAS and RIXS represented in Figs. 1b and 2, the spectra are well reproduced throughout the transition.

The main effect is the sharp decrease in the 4f 1 component to the advantage of the 4f 0-related feature, which gains intensity as Ce becomes more

phase can be understood as a partial delocalisation of the 4f electrons. The increased contribution from 4f2 component at high pressure stresses the growing interaction between 4f and conduction band electrons, a characteristic feature of the Kondo-like behavior, and consequently an increase of the hybridization parameter.

Fig. 2. 2p3d-RIXS spectra in elemental Ce as a function of pressure (dots). Superimposed are the calculated spectra (thick line)

The picture that arises from RIXS analysis at the

transition in Ce metal is that of the coexistence of competing effects : partial delocalization of the 4f electrons through band formation with the conduction band states on the one hand, and reduced electron-electron correlations on the other hand that allow the system to accommodate stronger on-site repulsion. The quantitative analysis shows that nf deviates from unity as a direct consequence of non-zero hybridization : the occupation number passes from 0.97 (TK=70K) in the

phase, assuming a coupling parameter, proportional to the hybridization energy, of 100meV.