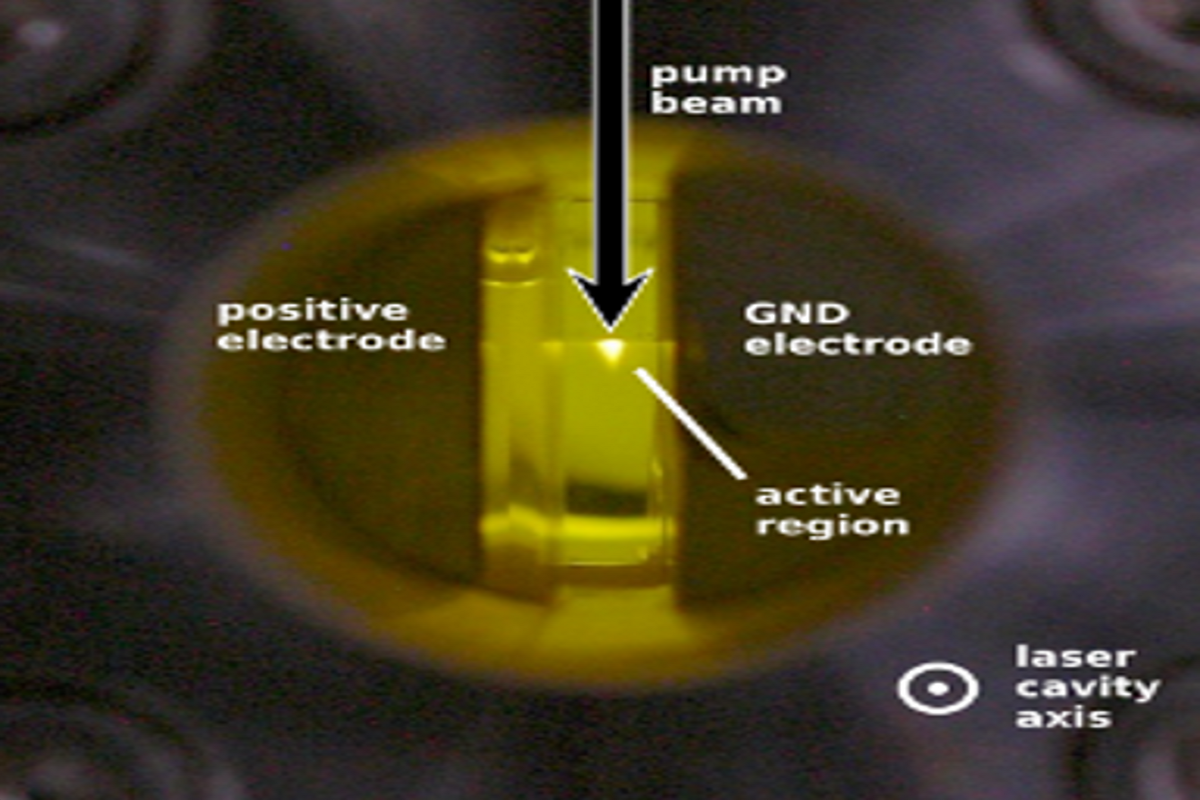 In order to achieve a laser source able to emit in the UV range, we are investigating an approach relying on the intracavity second harmonic generation (SHG) in a dye laser. Instead of adding an additional optical element in the cavity to perform the SHG, we use the active medium itself as a nonlinear element. Our first result consists in the construction of a dye laser where the circulating solution contains a nonlinear chromophore in addition to the dye.

Obtaining a SHG effect requires the chromophore molecules to be aligned, as a consequence, we have built a specialized cell which allows both the circulation of the solution as well as the application of an electric field to orient the molecules (an approach similar to the one used in EFISH measurements). In addition, the cell allows for the optical pumping by the external laser (top window) as well as for the coupling of the active region to the laser cavity (side windows). The photo of the cell is taken along the cavity axis, from the position of one of the mirrors, and shows the fluorescence spot from the active region.

(left) a view of the active area in the cell. (right) wavelengths involved in the self-doubling process and elements absorbing/generating them.

Since we are not interested in extracting the laser emission, but only the SHG it generates, the cavity is formed by two 100% reflective mirrors and the SHG signal is extracted using a dichroic mirror Rmax at the SHG wavelength and Tmax at the fundamental wavelength. The output beam is focused on the input slit of a monochromator equipped with a photomultiplier for spectral analysis.

Currently, we are extending this result in two directions. On the one side, a novel class of molecules which combines the emission properties of the dye with the nonlinear properties of the chromophore, has been developed in Paris at the LCP. Its use would further simplify our approach, permitting single multifunctional material instead of a composite.

On the other side, we are using our experience in structuring polymer films to move to a solid device (a DFDL laser). The first step is a « normal » laser, which only includes a dye: compared to other groups, we are using an approach which consists of writing the Bragg structure directly in the active layer. This has the advantage of better coupling the mode with the Bragg structure, but poses the problem of degradation of the film during the inscription of the structure. We have tested two types of approach, one based on two-beam intereference to create the periodic grating, the other one relying on two-photon inscription to create the structure.

(left) emission intensity as a function of pump power in a PETA film doped by R6G (used as initiator and active medium). (right) emission spectra from R6G in three PETA films where gratings of different period have been inscribed.