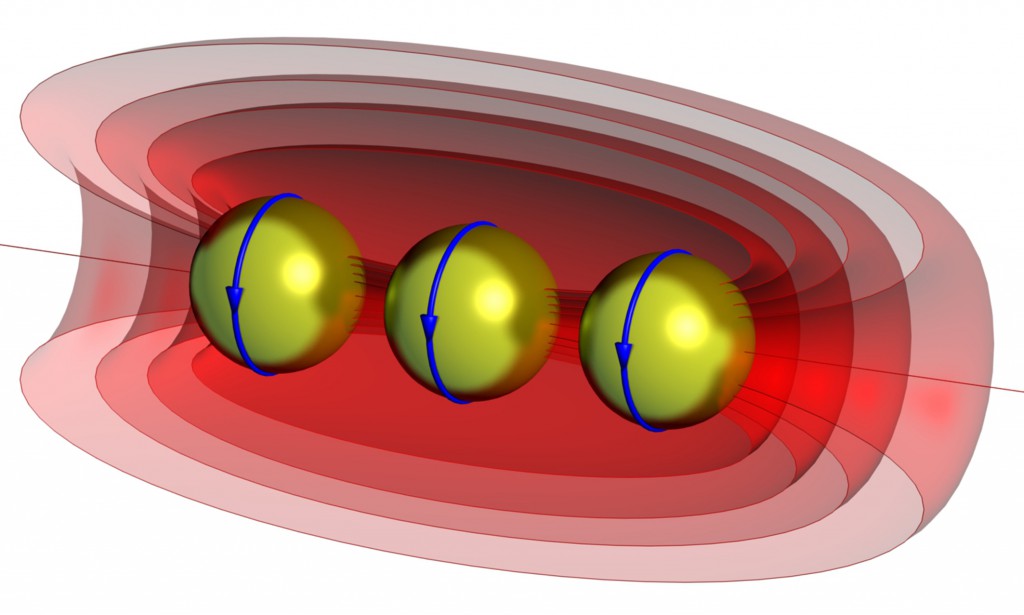 In many cases, functional nano-objects will have to be organized in suitable architectures. Our trademark is to endow such objects with mesomorphism, so as to drive their spontaneous assembly into a variety of mesophases, such as lamellar, columnar, etc. Mesophases have several desirable advantages : they are defect-tolerant, self-healing, and very often can respond to external stimuli such as electric or magnetic fields.

Single Molecule Magnets or SMM are nanometric molecular clusters able to retain a magnetization. One or several paramagnetic metal atoms are held together by organic ligands which also mediate the intra-molecular magnetic interactions. Below a certain « blocking temperature » each one of these molecules behaves like a tiny magnet, i.e. its magnetic moment is blocked along a precise direction. These molecules are studied for at least two reasons : they are at the boundary between the quantum and the macrosopic world, and they are envisioned as the ultimate storage element for magnetic information.

As of today there are hundreds of such molecules but in spite of much research, the blocking temperatures still are very low, and one is still unable to explain all the phenomenons at play. Our research on such systems is twofold : we try to get them to self-organize in the bulk or on surfaces, and we try to understand some of their « inner » properties.

Along the first line, we have succeeded in preparing the first mesomorphous derivative of the famous « Mn12 » SMM. Depending on the characteristics of the mesogenic ligands (size and position of the substituting groups), clusters possessing fluid mesophases with 3D (cubic) or 1D (smectic) positional order have been obtained. Even though short ranged, the intra-layer ordering of the molecular cores in the smectic phase is square-like. The magnetic properties are preserved upon functionalization and the molecules are thermally stable up to 150 °C. Another very interesting result is the fact that the main molecular axes of the magnetic cores share a common alignment direction, in a nematic sense.

It seems reasonable to expect that these remarkable features may facilitate the 2D ordering of these clusters on surfaces, which is the ultimate goal. In order to tailor more precisely the mesomorphic behaviour of these SMMs, the modification of the ligand structure as well as the regioselective substitution of two different ligands (at the axial and equatorial positions) are in progress in our laboratory.

Metal nanoparticles are nice building blocks for the preparation of high-end innovative materials. In particular, gold and silver nanoclusters have original optical and magnetic properties which could be fruitfully combined with those of organic molecules used as ligands, yielding a new class of materials. Here again, using mesomorphism adds advantages and extra-value to the system.

2nm gold core dendronized nanoparticles display a somewhat peculiar mesomorphism as the isotropic phase appears between the amorphous solid phase and the fluid micellar cubic phase (Cr -10°C Iso 80°C Cub 140°C dec.). This phenomenon is known as « isotropic phase rentrance » and it has already been reported for other compounds. They also exhibits original magnetic properties, being ferromagnetic from 4K up to at least 400K.

The particle adopt the shape of a truncated octaedron (right)

Structure of the 3D network of nanoparticles.

Nanoparticles bearing other types of ligands, organizing in a variety of architectures, are currently being investigated. Original plasmonic and magnetic properties are expected.