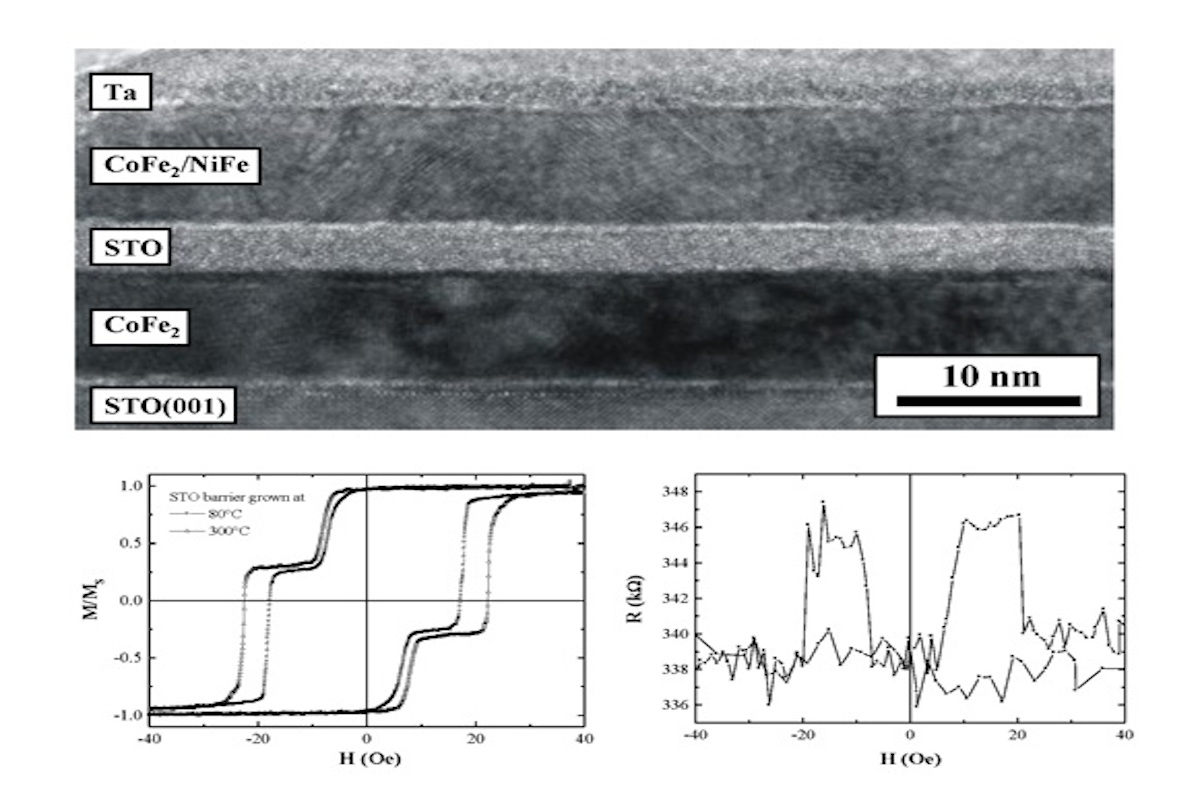 The high tunnel magnetoresistance obtained in magnetic tunnel junctions is highly conditioned by the existence of high quality thin films made out of half metallic materials which have a high spin polarization at room temperature. Among the materials allowing such high room temperature polarizations we can cite the ferromagnetic oxides Sr2FeMoO6 (SFMO) and La2/3Sr1/3MnO3 (LSMO) that we study already in our laboratory. However, up to now, the TMR ratios are small when such oxide layers are integrated as magnetic electrode in magnetic tunnel junctions.

In the case of SFMO, SFMO/STO/CoFe2 magnetic tunnel junctions were realized. Atomic force microscopy (AFM) in topographic and conduction modes showed that the surfaces at the upper and lower magnetic/non-magnetic interfaces are flat and that the barrier is electrically homogeneous and free of hot spots. However, EELS analyzes indicated fluctuations of the Fe concentrations at the SFMO/STO interface. This observation was correlated with XMCD measurements which showed that the magnetism of the SFMO surface is much less intense than the average value obtained for the whole layer. The magnetic signal at the surface was lower than 1 µB/f.u. while SQUID measurements have indicated values of 3.4 µB/f.u. These low values were correlated with XPS measurements which indicated a deficit of Fe at the SFMO surface. The Fe/Mo ratio was about 0.2/1 instead of 1/1. This lack of Fe at the surface is probably due to a low oxygen pressure in the PLD deposition chamber which favours the formation of SrMoO4 at high temperature when the deposition process is stopped. This could therefore lead to an Fe concentration gradient between the surface and the core of the layer. Another hypothesis is that Fe from SFMO re-evaporates due to an evaporation temperature lower than the growing temperature. This second hypothesis needs to be confirmed by theoretical calculations or by dedicated experiments. Il all cases, the transition from a dynamic growing regime to a static one at the end of the deposition of the layer leads to changes of the sample surface which are difficult to control without a real time in situ chemical analysis techniques.

The lack of Fe at the SFMO/STO interfaces was the subject of a recent theoretical study. Calculations showed that perfect SFMO/STO interfaces with a half metallic character, lose their half spin polarization when they are Fe deficient, explaining the absence of TMR in our tunnel junctions.

Actual efforts are focused on the in situ analysis of the surface stoichiometry of our layers especially that similar problems can also appear in the case of LSMO where the magnetic and transport properties are quite sensitive to stoichiometry. Finally, it is important to note that such a half metallic electrode is also particularly interesting for other projects (e.g. spin dependent transport across organic barriers) where spin polarized currents are needed.

It is noteworthy to mention that a good knowledge of the surface stoichiometry of the few atomic planes near the magnetic/non-magnetic interfaces is also essential in the case of junctions integrating a SrTiO3 barrier. According to whether the last atomic plane of the STO barrier is a SrO or a TiO2 one, the spin polarization of the interface with the STO barrier can be very different. This was recently evidenced in CoFe2/STO/CoFe2/NiFe magnetic tunnel junctions grown by PLD.

Figure 1 : TEM image of a CoFe2/STO/CoFe2/NiFe tunnel junction (upper figure). Magnetization and magnetoresistance curves of the junction. The low TMR ration is due to a lack of control of the atomic planes (SrO or TiO2) of the barrier in contact with the magnetic electrodes.